Renato sometimes makes accessories, such as this necklace, to go along with his collections.

Renato Amado, the designer behind the label Lyle Thomas, has taken the opposite path than us across the Atlantic. Renato’s parents were born in Colon, Panama, and lived in Panama City until he was eight. Then he moved to New York, and it’s been his home ever since. Renato currently lives in South Brooklyn and has an atelier in Chelsea, just north of FIT.

We talked to Renato on Skype about where he got his start, his inspiration for the Fall 2012 season, and all the crazy cool things going on in Panama right now.

Renato said he hasn’t been back to Panama in years but he’s been reading all these great things about PTY and really wants to come over soon and see the city again for himself. “I heard there are now art galleries in Panama City! That’s awesome!” Renato said, then added, “Diablo Rosso? Or something?”

He said the date of last year’s fashion week didn’t work for him, but he’d really like to come to PTY this fall for the next fashion week.

The name Lyle Thomas is a combo of his paternal and maternal grandparents’ apellidos. Renato explained the start of the line this way, “My inner passion for fashion and my desire to introduce a brand built on classicism and modern appeal [detail, prints, cuts].” Renato started Lyle Thomas in 2009 after finishing his technical education in Paris. He’s inspired by French designers and bigwigs like Balenciaga and Helmut Lang. “I admire Calvin Klein for his professionalism and business smarts,” Renato added. “He has a great team behind him, of course, but I really think he deserves so much credit.”

Lyle Thomas isn’t an international behemoth like Calvin Klein, yet. But there have been five collections so far, almost entirely menswear. The right kinda lady, though, can certainly rock any of his button-downs. This collection,  A/W 10,”VICTORY”, has some womenswear pieces mixed in with the mens. 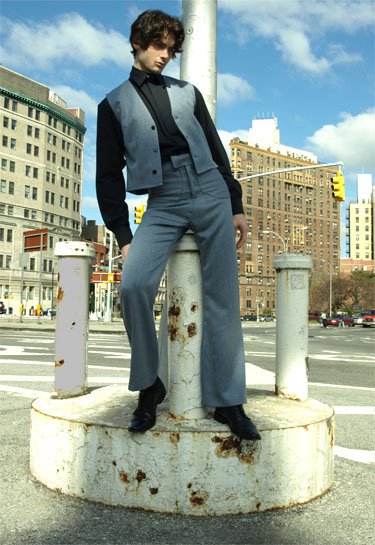 (While doing research we also fell into a little bit of a Youtube blackhole and watched some photo-montages of another Lyle Thomas, a baby of some “16 and Pregnant” star. The baby is pretty cute. I digress.) Renato says he’s interested in doing more womenswear stuff well into the future but for now wants to stay focused on mens.

Renato modeling two pieces from his new collection. His white pants are awesome, his mug is a lot softer over Skype!

His new collection for Fall is called “BELIEVE” and is inspired by Berlin in the 1930’s. “It’s very sleek, very simple, very militaristic.”

“You’ll never guess where I set the photoshoot of the new collection,” Renato said, laughing. “The loading docks behind Macy’s!” Ooo baby. I wanna believe!

Lyle Thomas is for sale on UsTrendy. Ch-check him (and his clothing) on Facebook here.

(This is awesome, just realized we can do both NYC & PTY recs:)

Where do you recommend in Panama City? Going to Balboa Ancon district and having a stroll down El Prado walkway. I love this place for its serenity, all the palm trees line the way, and I have such fond childhood memories of going there with my dad.